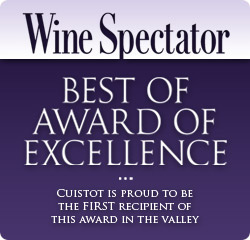 We are closed on Sundays

The Wine List is updated frequently;
however, selections, vintages and/or prices
are subject to change at any time.

Farouk Chaabi is a sommelier, wine consultant, educator, advisor, personal wine buyer and luxury French & Italy wine tour guide. He was born in Tunisia. He grew up in the Northern Rhône Valley, in the heart of Syrah, surrounded by the prestigious appellations of Hermitage, Crozes-Hermitage, Saint Joseph, Cornas, and Saint Péray. He moved to the US pursuing his studies in 1991. Farouk’s appreciation of wine grew as he apprenticed under French and Italian wine experts in the United States. 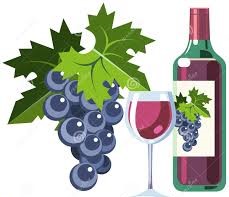 Please check back often
This page gets updated frequently

Cuistot is the Perfect Venue
for Private Parties,
Meetings and Events

From small, intimate Gatherings to large
Receptions and Dinners for up to 320 Guests.

Please contact Michael Shimer
for details or to book your event.
760.340.1000
michael@cuistotrestaurant.com

You can also customize your Menu by including items
from our Regular Dinner Menu. 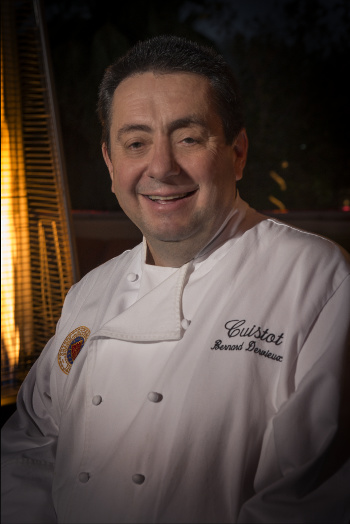 Bernard was born in Condrieu, France in 1953. His family operated a farm and this is where Bernard gained his appreciation for fresh, tasteful food. His father wanted him to pick up a trade, so at age 13, he became an apprentice charcutier and worked in Vienne until 1972. He worked under the direction of Chef Paul Bocuse in Lyon, France from 1972 to 1974 as a cuisinier and with Roger Verge in Le Moulin de Mougin. Bernard was sent by Paul Bocuse to the United States in 1974 to work at Le Francais in Wheeling, Illinois as a saucier/sous chef under the supervision of Jean Bachet. He then worked at the Pump Room in Chicago, Illinois from 1978 until 1980 as Executive Chef.

When you have a thriving restaurant, widely regarded as one of the best, even perhaps the best in the desert, why on earth would you want to move? A Chef’s life is stressful enough! To take on the extra challenge of moving everything from a well-established location to a totally new venue seems like a choice of a workaholic run amok. But the opportunity to purchase the land at the intersection of two of the most traveled and renowned thoroughfares in the desert only presents itself once in a lifetime. So in 2003 Bernard and his wife Susan broke ground on their new location. The building incorporates a rustic French farmhouse theme conceived by the Dervieuxs and executed by Design Development in Agoura Hills, CA.

Spacious dining areas are separated into four major rooms to accommodate up to 290 diners, including 80 on the heated, outdoor terrace. For private parties there is a comfortable Wine Room which seats up to 40. The largest dining room features a giant fireplace reminiscent of the one in Dervieux’s childhood home near Lyon, France. Bernard’s Room overlooks the gleaming exposition kitchen for those wishing to experience the creative energy of the Chef and his staff in action.

Note: With some GPS devices our proper address
does not work well.
Please use the above "GPS Address" when using GPS.